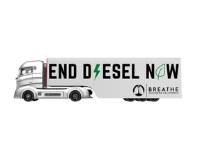 ISSUE AT THE PORTS

The San Pedro Bay Port Complex is a vital economic engine for our region, and we appreciate the work the Ports have done to reduce emissions over the years; however, the Ports must make more an effort to clean up the diesel pollution that negatively impacts the public health of those who live and work in communities adjacent to the ports, railways, freeways, and warehouses.

The Adoption of the Clean Trucks Fund Rate

In 2006, the Ports of Long Beach and Los Angeles created and approved the San Pedro Bay Ports Clean Air Action Plan (CAAP), which is an air quality plan that aims to reduce port-related air pollution and related health risks. A critical component of the CAAP is advancing the Clean Trucks Program that strives to transition the current drayage truck fleet to near-zero technologies in the near-term and zero-emissions technologies by 2035.  A key element of the Clean Trucks Programs is the implementation of a Clean Truck Fund (CTF) Rate.  This rate, as proposed in the 2017 CAAP Update, will be charged to beneficial cargo owners (BCOs) – large companies such as Walmart and Amazon – for loaded heavy-duty container trucks to enter or exit the Ports’ terminals.  The goal of the CTF Rate is to help truckers subsidize the cost of a clean truck.

In 2019 and 2020, when the Ports were considering the adoption of a CTF Rate, we joined several organizations in urging the Ports to adopt a CTF Rate that would significantly increase the transition of dirty trucks to clean trucks.  Unfortunately, the CTF Rate adopted by the Ports on March 9, 2020 was just $10 per twenty-foot equivalent unit (TEU).

According to an economic study commissioned by the Ports, the $10/TEU approved by the Ports will only raise $90 million, which is an insufficient amount of money necessary to turn over the fleet of diesel trucks to near-zero and zero-emission technologies.  Currently, there are roughly 18,000 trucks that are registered at the Port. Of that 18,000, approximately 8,000 are pre-2010 diesel trucks that will be banned by state law on January 1, 2023.  The Port has a chance to convert 45 percent of the drayage fleet to near-zero and zero-emission technologies ahead of the 2023 deadline, but by instituting a CTF Rate of $10/TEU, the Port is not serious about achieving their CAAP goals.

Moreover, while the Ports have decided to adopt a CTF Rate of $10/TEU, they have yet to begin collecting it.  For what exactly are they waiting?  Business is booming.  The Port of Long Beach in 2020 posted a record-setting year moving over 8.1 million TEUs, representing a 6.3 percent increase from 2019.  The Port of Los Angeles meanwhile handled approximately 9.2 million TEUs in 2020, which was their fourth-best year ever.  The Ports cannot point to uncertainty while simultaneously producing record-breaking figures.  Every day that we delay the $10/TEU CTF Rate implementation is another opportunity missed.

Beyond the implementation of a CTF Rate, there is another, simpler action the Ports can take to expedite the transition.  The Ports Drayage Truck Registry, the approved list of drayage trucks that can enter the ports to drop off or pick up cargo containers, can play a significant role in phasing-out diesel trucks and replacing them with clean trucks.

As of October 1, 2018, only model year (MY) 2014 trucks and newer could be newly registered in the Ports Registry. But older trucks already registered could remain on the Registry. After December 31, 2022, though, a key state regulation will no longer allow the state’s Department of Motor Vehicles to register trucks with engines that are MY 2009 or older.  So owners of trucks with pre-2010 engines must retrofit their trucks with MY 2014 engines or later or replace their trucks with new near-zero or zero emission trucks.  One day later, on January 1, 2023, the Ports’ Registry will only allow trucks with near-zero and zero-emissions engines to be added.

It is this January 1, 2023 date that needs to be re-evaluated.  By being one day after the DMV deadline, it promotes owners of pre-MY2010 diesel trucks to purchase a used MY2014 or later diesel truck at a much lower cost than trucks with cleaner engines.  Moving the deadline to an earlier date will prevent more dirty trucks from being registered and therefore would prevent more pollution in our neighborhoods.

As the deadlines currently stand, the Ports Registry is susceptible to a flood of diesel trucks being registered at the very last minute, which would allow dirty trucks to operate at the ports well beyond their stated goal, as well as the state’s, of a transition to near-zero technologies.  Currently, the ports’ CAAP Update wants a transition to near-zero technologies in the short-term with a long-term transition to zero-emission technologies.  On paper, this sounds good.  But in reality, the ports have not clarified the steps they will take to actually realize these goals.

The Los Angeles Board of Harbor Commissioners should work with the Long Beach Harbor Commission to immediately implement the $10/TEU CTF Rate and begin collecting the funds that will replace diesel trucks with clean trucks.

The Harbor Commissions should consider raising the fee to address the failure to implement the fee for nearly a year during one of the biggest booms at the Ports.  The economic study commissioned by the Ports projected 56 percent growth from 2021 through 2035 even if the CTF Rate were set to $70/TEU, which would raise substantially more money for clean trucks than the $10/TEU.

The Los Angeles Board of Harbor Commissioners should work with the Long Beach Harbor Commission to move up the date prohibiting any more diesel trucks from being added to the Truck Registry to align with the implementation date of the $10/TEU CTF Rate.  This way truck and fleet owners will not be able to replace their pre-2010 diesel trucks with a newer diesel truck and will instead have to pivot to a cleaner trucker.

Mayor Garcetti has the authority to appoint individuals to the Los Angeles Board of Harbor Commissioners while Mayor Garcia of Long Beach has the authority for the Long Beach Board of Harbor Commissioners.  They should make public health more of a priority when naming individuals to that board.  Public health is often ignored or glossed over, just as it was in the Ports’ economic study regarding a potential fee on cargo containers.

The Ports should create and adopt a comprehensive zero-emission port implementation plan by the end of 2022 that will guide it toward becoming a zero-emissions port by 2035.  Benchmarks, which are not included in the CAAP or CAAP Update, are important to ensuring the end goals are met.

Tell your elected and appointed officials to pursue and implement policies that will improve air quality for Southern California residents! We must End Diesel Now!
Sign Now
Urgent

Help contribute to our team by making a donation. We must End Diesel Now!
Donate Now
Donate